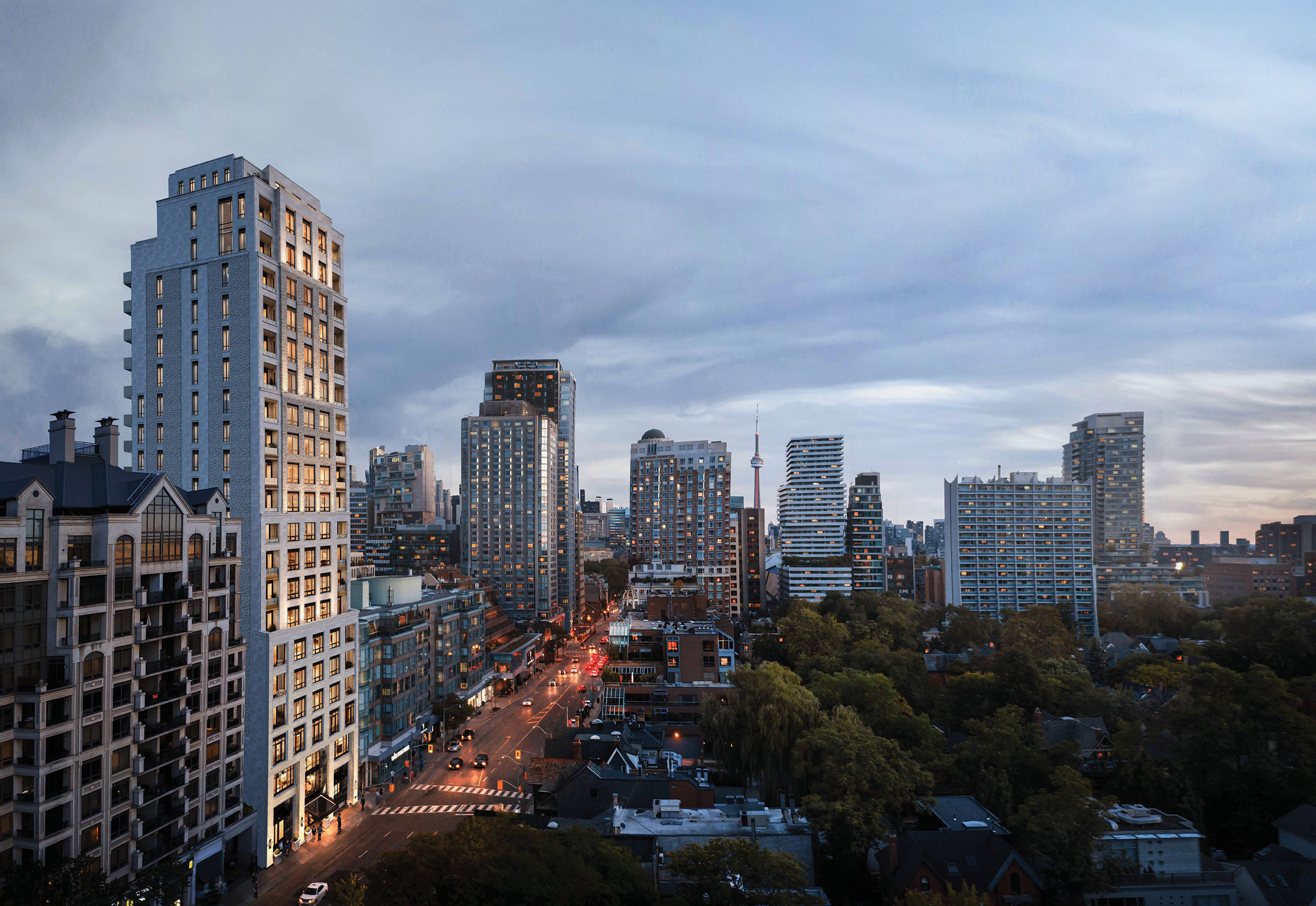 A city of exclusive neighbourhoods

Toronto is one of the most diverse and culturally rich metropolises in North America. But what binds it all together are the 140 individual neighbourhoods that make up its collective whole. Each neighbourhood has its own discrete personality but all work together to interconnect seamlessly.

“Toronto is often referred to as a city of neighbourhoods,” says Gregg Lintern, chief planner for the City of Toronto. “The city as we know it is a consequence of evolutionary change, driven by internal and external forces. Growth and change in a city of three million people is complex and building a more livable, equitable Toronto is a top priority.”

A one-hour walk southwest from Yorkville to Liberty Village will take you through six or seven of them, depending upon your route, from the designer boutiques of Yorkville and the sprawling University of Toronto campus to the diverse food scene in Little Italy. You’ll encounter the new restaurants and bars of Dundas Street West, meander through Trinity Bellwoods Park and have a choice of the many pubs Liberty Village has to offer.

Most of these neighbourhoods have many features to offer the luxury buyer and the developers who are building projects in those neighbourhoods are able to capitalize on the number and variety of conveniences and amenities available for residents.

For Frank Mazzotta, president of Armour Heights Developments, the distinctive status of Yorkville was the ideal setting for the company’s 89 Avenue Yorkville condominium project. Mazzotta says New York’s Upper East Side is an ongoing inspiration for his company’s bespoke luxury project.

Designed by architect Richard Wengle, the tall, narrow and sleek building will be an iconic, postwar-style head-turner, Mazzotta says, and act as a counterpoint to the many glass towers being built downtown, including in Yorkville.

“There is no neighbourhood anywhere in Canada like Yorkville,” Mazzotta says. “It is on par with only a handful of global neighbourhoods, each synonymous with luxury, style, exclusive boutique fashion retail, five-star restaurants, international art galleries, world-class hotels and exceptional residences. Yorkville is Toronto’s epicentre for style, grace and luxury.”

Mazzotta recalls walking around New York and being inspired by what he saw, and he brought that inspiration north to Yorkville. When he plans a new project, he says he focuses on the conveniences that a neighbourhood has to offer, and the traffic patterns and transit accessibility that make it easier for residents to get it and out of the area.

He also looks at how that neighbourhood will expand and excel in the future.

“We want to be the catalyst, with our bespoke, boutique-type building, in that growth [for Yorkville],” he says.

Yorkville is unlike any other neighbourhood in Toronto, he says. “Our purchasers at 10 Prince Arthur want that energy and elegance to be part of their everyday lives.”

Just next door in Rosedale, No. 7 Dale Residences by Platinum Vista Inc., designed by Hariri Pontarini Architects, will feature just 26 suites ranging from 2,050 square feet to more than 5,200 square feet that look out onto the valley. The project sits on Dale Avenue, just north of Rosedale Valley Road.

“It’s one of Toronto’s oldest, most exclusive and affluent neighbourhoods with windy tree-lined streets, parks and a close proximity to downtown,” says Joshua Shteiman, vice-president of development operations for Platinum Vista.

“Location-wise, it doesn’t get better. You’re downtown, without being in the noise of downtown. The ravine and maturity and lushness of the trees offer a lot of sound insulation. The surroundings are conducive to an active, healthy lifestyle. Some of the most exceptional homes in Canada are in Rosedale, designed by Canada’s most celebrated architects.

“Luxury buyers now want the best of both worlds,” he says. “They want a large home with an expansive outdoor space while having great views and the ease of a condominium/hotel lifestyle.”

For luxury developer Shane Baghai, when he was looking to purchase land for what has now become Leaside Manor he chose the neighbourhood based on his feeling for the area. Leaside Manor features 38 luxury suites and is located at the bottom of Millwood Road and Southvale Drive.

Baghai says that when is working on a new project, he walks the neighbourhood he will be building in. He’ll create mental imagery of the build form, envisioning how compatible it will be with existing buildings in the rest of the neighbourhood and even imagining the type of clientele who will live there.

“It’s funny, because it’s not a concise thing,” he says. “You get inspired. It’s a buildup of ideas. You create that virtual picture in your mind.”

Sometimes, albeit rarely, it doesn’t work out exactly as envisioned. One of his projects, which he originally thought would be more suited to younger people, ended up attracting an older clientele.

Leaside scored for him because many of those who live there tend not to want to leave. They will sell their homes in Leaside and want to buy a condo or rent in the same neighbourhood, Baghai says.

The area has the upcoming crosstown light rail line going in along Eglinton Avenue, luxury retail shopping centres, grocery stores and many other retail businesses, all within walking distance. Baghai adds that the European pastry shops and sidewalk cafés in the area help to make it unique and special.

“Leaside has been a well-kept secret, or it was, until now,” Baghai says. It’s accessible, where one can drive to downtown Toronto in almost the same time as it takes to get up to the 401.

“A friend was pointing out to me how you are not downtown, and you are not uptown, either. There is a sense of quietness here. It’s almost a hamlet atmosphere, like you are in a small town or a large village.”

Walkability is a big factor in a neighbourhood’s appeal to a buyer, says Barbara Lawlor, president and chief executive officer of Baker Real Estate Inc., which is handling sales and marketing for the United Building, a luxury condo project at the corner of University Avenue and Dundas Street West. That project is unique because of its central location.

“It’s an entire city block,” she says. “You can walk to the Financial District, equal distance to the Entertainment District. That’s on top of world-class hospitals and research facilities, Queen’s Park, cultural venues, the Four Seasons Centre for the Performing Arts, Roy Thomson Hall, Festival Tower for the cinemas and Eaton Centre for shopping.”

Toronto was rated the third most walkable Canadian city for 2020, behind Vancouver and Montreal, according to Walk Score, a ranking system that rates cities across Canada and the United States.

Lawlor says that the “united” part of the name for the project was based on its connectivity to all the different neighbourhoods that surround it.

“You don’t have to get into your car, and that’s become such a key element for buyers,” she says. “We are unique here because our immigration is so diverse. There is a neighbourhood to celebrate every culture. You don’t find that in most cities. And being able to take in those different cultures and diversity within a 10-minute walk is quite amazing.”

Some of Toronto’s neighbourhoods are fortunate to be adjacent to parks and the lake, and offer the lifestyle and wellness benefits that come with that.

The 38-storey Mirabella Luxury Condominiums project by Diamante Development Corporation will be nestled right between Lake Ontario and High Park, meaning residents have direct access to some of the best lifestyle amenities in the city. They’ll be able to enjoy jogs along the Martin Goodman Trail, bike rides through the park, picnics by the beach and sunsets over the lake.

One of the latest projects by Menkes Developments Ltd., 77 Clarendon, is nestled amongst the old neighbourhood charm of the prestigious South Hill area. The project at Russell Hill Road and Clarendon Avenue will feature just 15 elegant private residences.

“In our experience with developing previous luxury projects like Four Seasons Private Residences and Pears on the Avenue, we saw real market demand for buyers looking for smaller, more intimate and neighbourhood-oriented buildings,” says Mimi Ng, senior vice-president of residential sales and marketing for Menkes Developments.

“South Hill is one of the neighbourhoods that checks off all the boxes, so to speak, from a luxury buyer’s perspective. It’s a mature community with large homes and leafy green streets, with easy access to a great park system, including the Nordheimer Ravine, and spectacular views due to its location on top of the escarpment.”

The building is also adjacent to other great neighbourhoods, she says, such as the Annex and Yorkville, which means that a multitude of excellent restaurants and shopping are just a 10-minute walk away, without the hassle of dealing with traffic.

For every discriminating luxury buyer, there is a neighbourhood that delivers on everything they need and want.

For project information or to book your private appointment and begin the captivating process of custom designing your bespoke residence through direct consultations with our development team.

Visit our Presentation Gallery and Model Suite at 161 Cumberland St., and discover the possibilities of your custom home in the sky.